As the Young Critics programme draws to a close for 2014, Emma Gallagher from Greise Youth Theatre reflects on her experiences as a Young Critic.

‘The buzz is electric’ Dublin Theatre Festival director Willie White told the Irish Independent, and I could say the same for our experience in The Young Critics Programme. It is frightening to think it was around Easter time that I set out for my very first Young Critics weekend.

Oscar Wilde, Anton Chekhov and Owen McCafferty were names I knew a little about. That was until we started the workshops. Working with Alan King and Karen Fricker was like working with two theatre knowledge generators and I mean that in the best way possible.

I was so surprised to how in depth we actually we went into critiquing a play. In only two weekends our knowledge of theatre and all its aspects had expanded immensely. It was a real eye opener, exploring each element that can make a production special. From lighting to sound, music, and set to costume design, performers, writers and directors, the collaborative work put into productions is truly unique.

I became aware of the different types of theatre, from classic and contemporary to immersive, all of which we got the pleasure to experience. These were fantastical productions that had my mind blooming with new ideas.

An Ideal Husband at The Gate Theatre was a real treat. I was astonished by the intricate detail and energy that had been put into this one show. It was a wondrous romantic comedy enriched in Wilde’s dark and delightful witticisms.

Being involved in The Young Critics Programme really opened my eyes to the different professions within the world of the creative arts. From listening to director Gavin Quinn speak about Pan Pan’s colourful and playground like production, The Seagull and Other Birds to the ever so sweet Marty Rae speak as openly and answer our questions about his experiences working as an actor.

Over the summer we were allocated the activity to bring each of our Youth Theatre’s to a new production in our own local venues.

Swing written by Steve Blount, Peter Daly, Gavin Kostick and Janet Moran, also directed by Peter Daly and starring Steve Blount and Janet Moran was a popular choice between The Young Critics participants. It received very positive feedback from a lot of the young people.

The Arts Centres kindly offered our Youth Theatre discounted tickets and NAYD organised a post-show chat with the cast of the production.

It was really interesting to hear how the show came into development and hear the actors speak about their character work in preparation for their roles.

Next was the video blog review of the play we chose to see. For the technophobes- I include myself in this category, this was a tricky challenge in which a few awkward techie problems occurred.

However, once I did manage to record a decent vlog, I actually felt I had really achieved something and it wasn’t half bad either. Having said that I won’t be the next Quentin Tarintino by any means but it was a very beneficial task and I think it will be of use in the future.

Spending two weekends with the young people from other Youth Theatres was splendid to say the very least. It was interesting to hear how different Youth Theatres’ work. We shared a lot of laughter and a couple of the members even shared a few tears during Ganesh Versus The Third Reich. It was a very touching production for a lot of people, so much so it received a standing ovation. 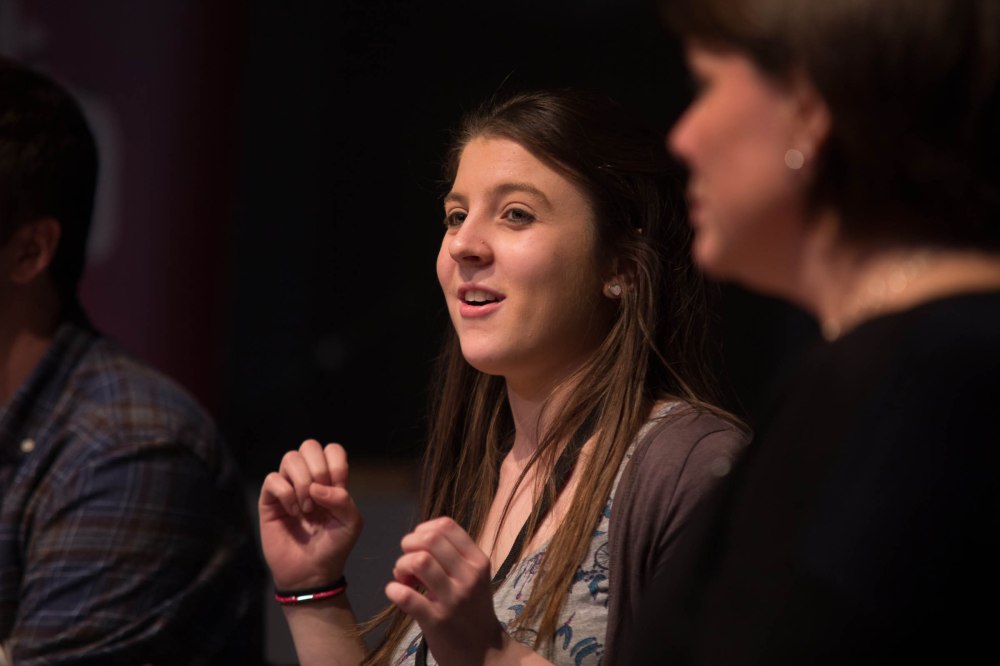 On the 5th of October The Young Critic’s Panel was held in The Project Arts Centre in Dublin. We had butterflies as people working in the shows, theatre folk and even Willie White attended. At first it was scary speaking about our honest opinions as a critic of the productions but also liberating too. I find public speaking a struggle, but this experience of sharing your thoughts openly about something you genuinely love and interests you was a real stepping-stone for me.

The buzz is electric – in the presence of people who are passionate about their work, their energy radiates. As Anton Chekhov said ‘knowledge is of no value unless you put it into practice’.

Young Critics inspires to create action in the world of the arts.