In the latest in our series of Young Critics reviews, Pierce McNee from Dundalk Youth Theatre traveled to London to see The Taming of the Shrew at Shakespeare’s Globe.

The Taming of the Shrew by William Shakespeare, directed by Caroline Byrne

Set against the backdrop of Dublin 1916, this is a classic play with an alternative twist, featuring an all-Irish cast. This choice of setting — one hundred years after the events that sparked Ireland’s drive towards independence — makes the staging of this production extremely significant. Katherine (Aoife Duffin) appears on the stage at the start of play and sings, passionately, an Irish ballad written by Morna Regan (dramaturg and lyricist) especially for the production. This firmly establishes the 1916 setting and showcases Duffin as a standout performer and a force to be reckoned with.

The Taming of the Shrew tells the story of two sisters, Katherine and Bianca. Bianca is intensely keen on being married off to a handsome suitor. Katherine has no ambitions to become attached to a man. There is one problem: Bianca cannot marry before Katherine, a.k.a. the shrew, is herself paired off. Going in, I was rather sceptical as to whether or not the production would cater for only an Irish audience, but it does not overly enforce the 1916 theme, which only becomes apparent on a few occasions. For example, a small fraction of the history is played out in the lyrics of Katherine’s two ballads. This make the theme subtly present throughout the performance but the production is kept grounded overall in the original story.

Caroline Byrne’s production is full of side-splitting antics whilst still exposing the serious and sometimes poignant aspects of the play. The misogynistic elements are portrayed with the earnest tone they deserve. The comedic facet is aided in particular by Aaron Heffernan as Lucentio, with his incredible physical comedy and natural wittiness.

Other notable performances include Edward MacLiam as Petruchio, who offers a truly gritty portrayal of the character. He brings an amazing sense of tension with Katherine and this really keeps the audience on the edge of their seats for the intense scenes between them. Helen Norton as Grumio plays her character with great jocularity but also sincerity in the more sombre scenes.

The set, designed by Chiara Stephenson, starts with the traditional Globe stage design with its balcony and pillars. A large black structure is built into the opening at the upstage centre of the stage. This opens up at various points to reveal a staircase. At certain moments during the first half, the stage becomes a 1916 classroom as a prodigious abacus and an anatomical skeleton hurtle onto the stage. A pit of dirty water also appears at the downstage centre of the stage in which Katherine stands while singing one of her ballads.

The costumes, also in Stephenson’s more than capable hands, are eminently satisfactory and greatly fitting to the production. Many of the costumes are 1916-inspired with the women’s pieces heavily influenced by the Gibson Girl look. This also introduces the theme of women’s rights one hundred years ago and also in today’s society. The final speech, delivered by Katherine, allows us to reflect on how much has changed in terms of women’s rights since 1916, when women were so poorly treated.

Pierce is an NAYD Young Critic for 2016 and a member of Dundalk Youth Theatre in Co. Louth.

Come join Pierce and all our Young Critics on October 9th at 1pm at Project Arts Centre.  They will be critiquing three productions as part of Dublin Theatre Festival 2016.

Invitation to a Journey

€22 million – the figure Eileen Gray’s Dragon Chair sold for in 2009. That’s all most people know about her. This production uncovers a great deal more than this fact, exploring the personal encounters in Gray’s life and sharing the accomplishments of this Irish artist with the Irish public.

Invitation to a Journey explores Gray’s life in vivid detail, from her colourful relationship with Damia, her French lover (portrayed powerfully by Kate Brennan), to her innovative career as an architect and designer. It is a co-production of Fishamble: The New Play Company, CoisCéim Dance Theatre, the contemporary music group Crash Ensemble and Galway International Arts Festival, and is written and performed in a groundbreaking way. The roles of the three dancers, three actors, and four musicians are melded to the extent that in some scenes it is difficult to tell them apart, especially in one scene where Damia and the dancers fight over a chair, all essentially becoming dancers. 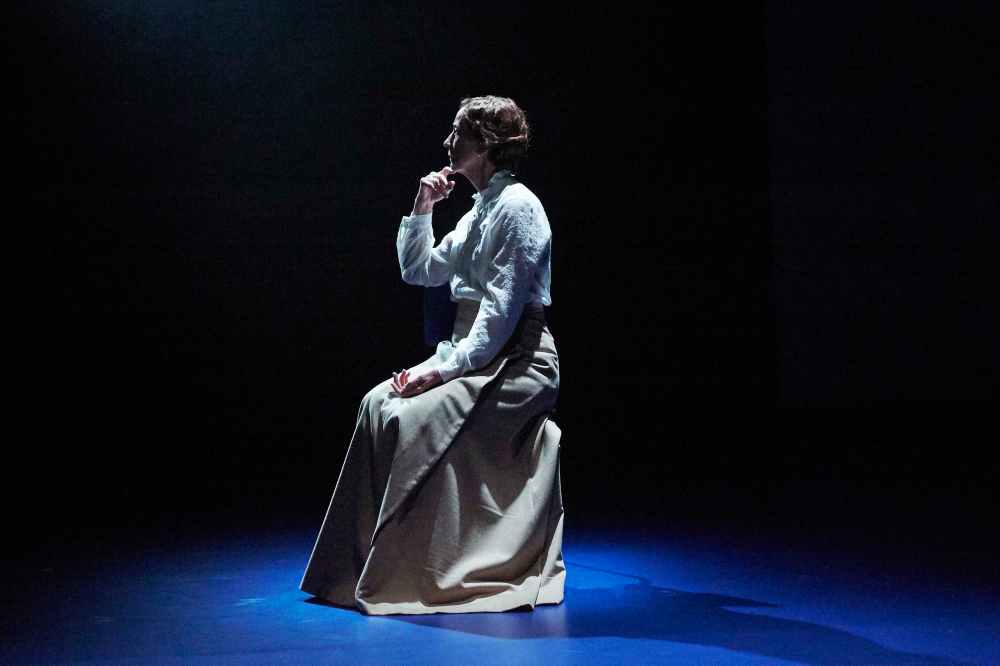 The musicians wear costumes suited to the era and have their hair crimped in a ‘20s style, which connects them to the dancers in particular, as they have the same hairstyle. (In the interest of full disclosure, I will say that my mother Deirdre O’Leary was involved in this production as one of the musicians).

The show opens with the three dancers offering their interpretation of Gray’s architecture through movement. Half a dozen nine-foot-tall doors on either side of the stage are then flung open by the remaining cast members, which segues into the auction of the dragon chair. As the cast bid for the chair, Ingrid Craigie — the actor playing Eileen Gray — sits in a chair behind them and becomes fleetingly visible as the bidders exit the stage and the lights dim. Her presence becomes much stronger as the show progresses, although at times that presence is overshadowed by the sheer amount of things going on onstage.

Halfway through, the show enacts the construction of e.1027, the iconic house Gray designed for herself and her lover the Romanian architect Jean Badovici. String outlining the foundations is taped to the stage by one of the dancers as Gray struts around the stage carrying blueprints. Only shortly afterwards, Le Corbusier (played by Ronan Leahy) paints lewd murals on the pristine walls of e.1027, nude.

In an era when most women were married off, Eileen Gray was openly bisexual, almost insanely driven, and creative. She was modern when it wasn’t mainstream and this show echoes that crazy creative determination that possessed her. While this show ambitiously melds the roles of dancer, actor and musician, it would be interesting to see what the difference in dynamic would be if the musicians had more dialogue with the rest of the cast and if Gray was more involved in scenes with the dancers. The mixture of concrete and abstract information presented through the different art forms gave a strong impression of someone’s personality. It seemed to be trying to express an inner creativity and drive that I now associate with Eileen Gray.

Come join Ciara and all our Young Critics on October 9th at 1pm at Project Arts Centre.  They will be critiquing three productions as part of Dublin Theatre Festival 2016.

The Young Critics Panel will take part on Oct 9th at 1pm at Project Cube. Chaired by Dr. Karen Fricker

The NAYD Young Critics will be at Project Cube on Oct 9th at 1pm to critique three productions as part of The Dublin Theatre Festival.

As the Young Critics hit the stage of the Dublin Theatre Festival  on Oct 9th , we will publishing a series of written reviews from our Young Critics.

Calipo Theatre Company’s return to theatreland has been a long time coming. Nearly five years after the success of Pineapple by Philip McMahon at the 2011 Drogheda Arts Festival, the troupe recently pounced back on our stages with a fresh and authentic piece of work called Glitch.

Time may have passed but the Calipo team remains as strong as ever, with director Darren Thornton – currently in the spotlight for his acclaimed feature film A Date For Mad Mary – and writer/performer Martin Maguire reigniting a theatre partnership that stretches back almost twenty years.

Glitch has a simple plot – it follows the story of broadcaster Mike Adams (Maguire), whose drivetime radio show has dominated the landscape for nearly fifteen years but whose popularity is diminishing. Everything appears to be changing – the politics, the technology, the public opinion. The media has become increasingly fast-paced and suffocating and Mike is under fierce pressure to change as well.

Constantly in denial and trying to escape his commitments, Mike is faced with a crisis when Jesse (Grainne Rafferty) emerges – a bitter and stubborn caller, who ends up alone on the air with Adams, following a technical glitch. For rest of the piece, we see Mike and Jesse engage in a battle of wits. Amazingly, these two characters never come face-to-face, which Jesse positioning her battle station behind Maguire, which spends most of the performance downstage.

On paper, Glitch does not make a striking impression. However, this production was not only executed sharply but had an incredibly original and innovative design. Kieran McNulty’s set was spacious and vibrant, comprising of an orange desk and vertical fluorescent lights emerging from the polished, black floor. 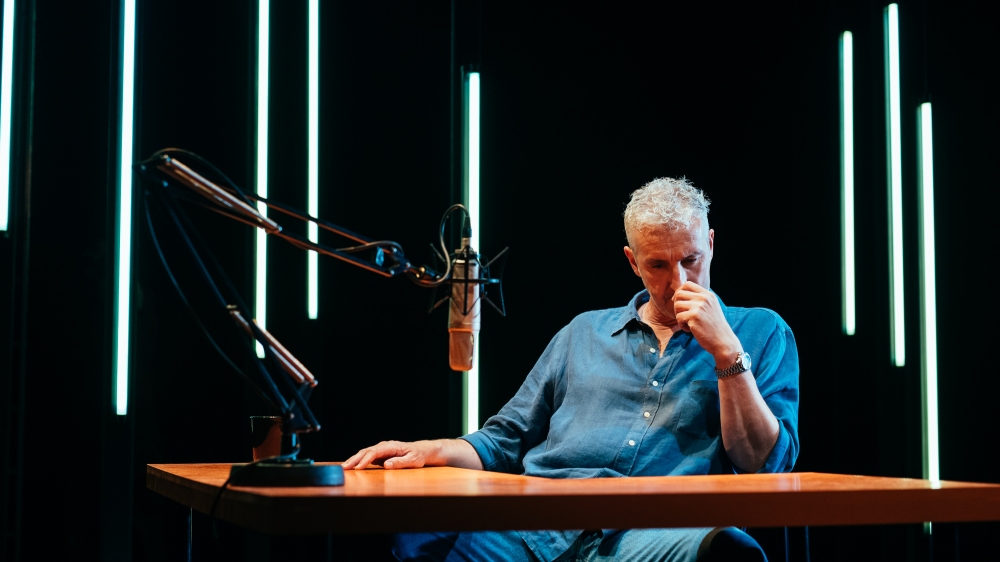 While the set was imposing and eye-catching, it was the sound design by Jack Cawley which made the greatest impression. Cawley successfully compiled over fifty voiceovers to create an array of different characters, from frustrated callers to newscasters to the people prominent in Mike’s life. Despite just two actors onstage, the flawlessly executed sound design created the illusion that there were many more.

Glitch is Maguire’s first play in nearly ten years. In fulfilling the challenging task of being both writer and performer, Maguire’s nerves were evidently visible onstage on the night I saw the show, and his delivery was sometimes unclear and unsteady. However, he maintained an excellent chemistry with Rafferty, who herself gave a robust and fiery performance as a single mother caught up in the struggles and prejudices of modern Ireland.

Tough on the surface, through lengthy and passionate conversations both Maguire and Rafferty’s characters’ softer, weaker sides are revealed. Both are isolated and have problems, and both have continuously disappointed the people in their lives. Through some particularly heartfelt monologues, we learn about Mike’s relationship with his elderly parents and his father’s final hours alive.

Overall, Glitch was a highly enjoyable production. Thornton’s ability to make the audience become invested and engrossed in Mike and Jesse’s strained lives demonstrates his excellence as a director.

Come join Louis and all our Young Critics on October 9th at 1pm at Project Arts Centre.  They will be critiquing three productions as part of Dublin Theatre Festival 2016.