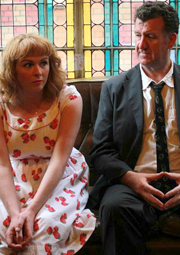 With the Young Critics firmly established as a hugely popular and beneficial programme, we decided to pilot some new elements to the programme this summer.

Following on from Alan King’s trip to the Theatre Critics of Wales Awards in February we took on some ideas from Guy O’Donnell and are piloting them for 2014.
Guy is the Arts Development Officer for Bridgend Council in South Wales and runs a Young Critics Scheme there.

Over the summer months we are asking the Young Critics to become programmers and select one professional production that they feel they and their fellow youth theatre members might enjoy. With the support of their local Arts Centres and venues, who will offer special youth theatre discounts to shows, the Young Critics will get to see more productions in their home communities.

The Young Critics will then do a short video blog on the production they saw and submit it to NAYD. From here, four of them will be invited to write reviews for the Young Critics Blog.

The intention of this approach is to allow the Young Critics to take their own independent steps of choosing a show for their fellow youth theatre members to see. They can develop their own programming tastes using some of the learning from Karen Fricker and Alan from the first Young Critics weekend.

The uptake and support from the venues have already been really strong.

The New Theatre in Temple Bar are offering all members of Complex Youth Theatre and Cabinteely Youth Theatre special €10 tickets for all productions.

Fishamble Theatre Company’s production of Swing, is touring over the summer months and has proven a popular choice with the Young Critics.

Members of Fracture/ Play Youth Theatre in Tipperary have received a special two for one deal when it plays at the Source Arts Centre in Thurlas on June 26th. There will be a post show discussion facilitated by Young Critic Sophie Quin.

Meanwhile 30 members of Griese and Kildare Youth Theatres will catch Swing thanks to a very special low price youth theatre rate at the Riverbank Arts Centre, in Newbridge on July 11th. Young Critics Emma Gallagher and Kyle Walsh will get to meet the cast of Swing after the show.

The Garage Theatre is home to Monaghan Youth Theatre and already does a lot to support the work of the youth theatre. Again they are hosting Swing and Lisa McPhillips has chosen this as the show for the group to attend.

In Cork the Everyman is extending their special school rate to Activate, Lightbulb and CIT Cork School of Music YT members. Aimee Wallace from Lightbulb has programmed her group to go see God Bless The Child on its Opening Night.

An Grianán Theatre is home to Letterkenny Youth Theatre. They will continue to provide many opportunities for the members to see shows for free or at significantly reduced rates, as does the Droichead Arts Centre in Drogheda, who have also extended that offer to the members of M.A.D Youth Theatre in Dundalk.

The Roscommon Arts Centre has extended another youth theatre rate to the members of Roscommon County Youth Theatre.

The benefits are huge for all involved. The venues will be building new audiences and all the young people will get to see even more quality theatre than usual. We would hope to develop and establish these relationships between venues and our members over the coming years.

The content created on the video blog and reviews will find a home on the Young Critics blog so expect a lot of updates in August and September.

Those venues supporting the Young Critics for 2014 are:

We would like to thank all the venue managers and their staff who have helped support this new initiative.

NAYD Young Critics visit the Abbey Theatre, Dublin for their production of Quietly by Owen McCafferty at the Peacock Theatre

Towards the end of April, this year’s sixteen Young Critics met for the first time. They had the usual three days of viewing exciting theatre while participating in workshops and having a fair amount of craic in Dublin town.

As the summer months approach, we are piloting some new and exciting angles to the Young Critics Programme that, with the support of the youth theatres along with their local venues and arts centres, can expand the Young Critics programme beyond those lucky sixteen.

Through a partnership approach we would hope to involve more young people in their local communities, develop stronger relationships between venues and youth theatres and help to build and sustain local audiences for theatre in that community.

The Young Critics will then do a short video blog on the piece they saw and submit it to NAYD. From here, four of them will be invited to write reviews for the Young Critics Blog.

The benefits are huge for all involved. The venues will be building new audiences and all the young people will get to see even more quality theatre then they normally would. This should encourage them to go and see more theatre than before and broaden their love and knowledge of the art form. Once the spark is ignited they will choose to go to more and more performances over the coming years and this will have a very positive influence on how they make their own theatre.

This is a really exciting departure for the programme and one that we would hope to develop and establish over the coming years.