Classrooms are some of the most popular scenarios for plays – whether it be a story of a trip to the boarding school (Daisy Pulls It Off by Denise Deegan), or a teacher faced with the duty of educating youth (Alan Bennett’s  The History Boys is a great example), the classroom is the perfect closed-off space for many a show. But one thing that I have never seen worked upon on the big stage is a parent-teacher meeting – and CLASS does this to perfection, and more. You could almost say…. It’s a CLASS act.

Puns aside, this production was one of the most phenomenal experiences I have had from a small-cast production in a while. The setting never changes. The tension never changes. The actors never change…but their characters do. The story revolves around Brian and Donna (played by Stephen Jones and Sarah Morris) and the struggles they face bringing up their children in a broken relationship. The standing point in the story is that their 9-year old child, Jayden, is having troubles at school – and his teacher (Will O’Connell) is intending to enforce learning support upon him, which brings great grief onto Brian specifically.

Now this alone would make for an interesting story. The could have stopped here, added little else, and the play would still be a triumph and an excellent piece of writing. But co-writers David Horan and Iseult Golden, under Horan’s direction, deserve extra appraisal for going beyond this one idea and adventuring into unknown territory. At first I was worried when I heard about the actors “reverting into the younger generation”. However, when I first seen Brian transform into Jayden and Donna into the child of a drug addict, I knew this was something special. Their childlike states gave myself and the audience the information we needed about the situation at hand without a word spoken by the parents. 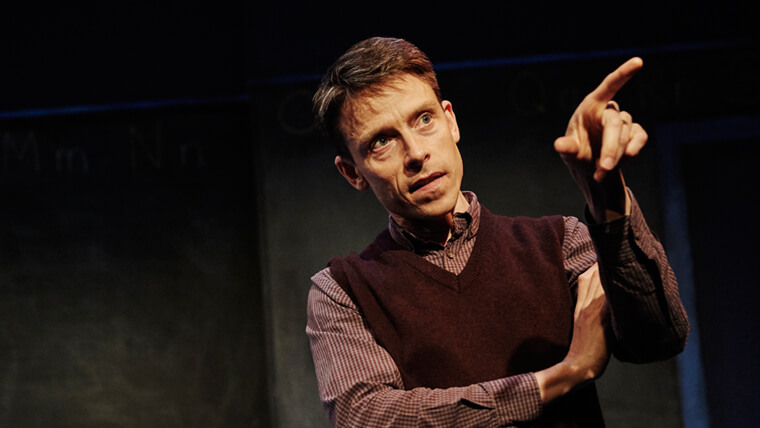 The teacher himself faces some sort of internal conflict – between his own personal matters, the slowly derailing meeting and the children’s situation at their learning support. It was interesting to note how he deals with both children and parents, despite them being the same actors – For example, their transition from a dance routine to a tense, nervous situation between the same trio.  This transition was flawless – especially with the parents and their kids, who could revert from being hilariously out of tune with the rest of the world to stern, stubborn, angry at the world and ever situation around them.

The ending alone was one of the key points of the play, and possibly the part that shook me the most. Of course I won’t spoil it, but it finally became clear the true nature of Donna and Brian’s relationship, and the root of the majority of the problems faced throughout the play. Ultimately, the experience was riveting and exciting,  with comedic moments scattered throughout the play – but the true focus and underlying messages of terror in a school environment and possible mental issues stuck strong with me, and for this I would thoroughly recommend seeing this play.

Class ran at the Peacock Theatre Dublin from 24th of January to February 3rd 2018. This production was reviewed at the Dublin Theatre Festival at The New Theatre in October 2017.

During the Dublin Theatre Festival, the Young Critics  paid a visit to the New Theatre to see a performance of Class by David Horan and Iseult Golden.

Class will be returning to the Peacock Stage in January and Molly Foley from Activate Youth Theatre has this review from its October showing.

This new play, written and directed by Iseult Golden and David Horan is in many ways quite simple. The set is realistic and the plot is a straightforward narrative, with only three actors playing the five characters established in the piece. Despite this, Class is one of the most engaging, enjoyable and thematically-rich plays I’ve seen in a long time.

The story is that of two working-class parents, Brian (Stephen Jones) and Donna (Sarah Morris), who are called in to their son, Jayden’s school to talk with his middle-class teacher, Ray McCafferty (Will O’Connell). The parent-teacher meeting that unfolds is broken up with scenes of Mr. McCafferty’s interactions with Jayden and another student in his class during which Jones and Morris seamlessly take on the roles of the two children. These relationships develop and change as these characters deal with internal resentments and face a variety of issues that arise through the play. 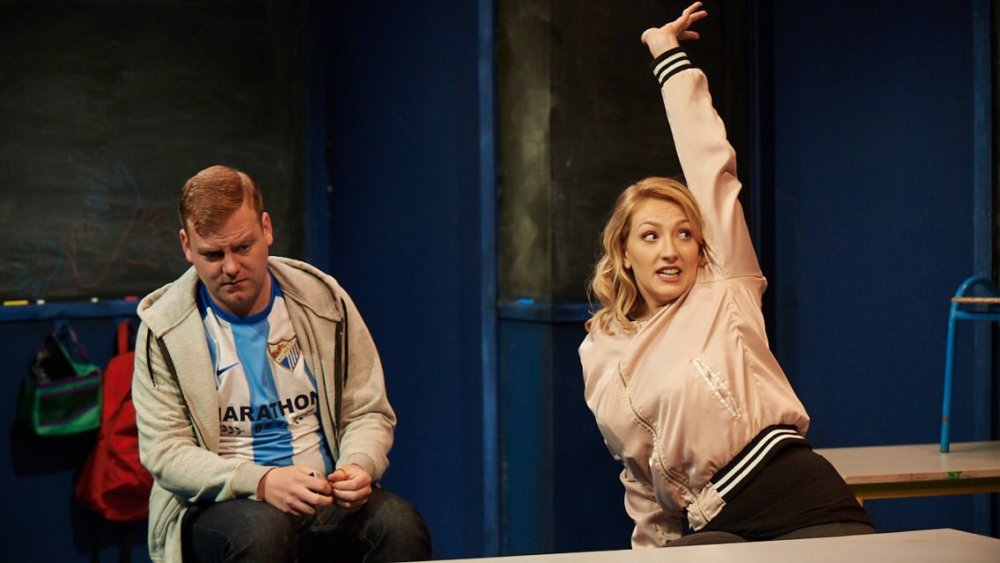 The play manages do deal with issues of social class and notions of status subtly without hammering in an established opinion or belief. Instead, it is a perfect example of ‘show don’t tell’, starting a conversation through real, flawed and relatable characters, each with valid motivations, opinions and outlooks. It does not paint characters as ‘good or ‘bad’ and doesn’t depict anyone as in the right or the wrong. Those decisions are left in the hands of the audience and I believe that by the end of the 75 minutes, most viewers will have had at least one moment of sympathy and/or identification with each character in the play.

Class feels like a very down to earth play that knows what it is setting out to do and does it well without any self-importance. Although the plot develops in very unexpected and extreme ways, it never feels like it is being dramatic for drama’s sake.

At its heart this show is an exercise in empathy, not asking for audiences to choose or change sides, but just to listen and perhaps to briefly find themselves in the shoes of others.

I would consider this show a must see. With a sharp, well written script and stunning performances, this show is as hilarious as it is heartbreaking. Five stars.

Class returns to the Abbey Theatre for a limited run from January 24th 2018.

Listen to full audio here are our panelists discuss three shows in front of a live audience.  Chaired by Helen Meany.

With the Dublin Theatre Festival starting today we are gearing up for  Youth Theatre Ireland’s Young Critics  to return once again to the DTF.

Since April, the Young Critics have been honing their critical  skills through workshops and online discussion with the support of professional theatre critics and facilitators. They have also been seeing lots of theatre, collaborating  with a group of Scottish  Young Critics and creating  their own criticism in familiar and unusual forms…

The Young Critics, representing youth theatre from all over Ireland, come together from Oct 6th – 8th, to see a number of shows, and take part in the Young Critics Panel on Sunday Oct 8th.

The three productions the Young Critics are going to see are:

With Young Critics representing Kerry, Kildare, Cork, Leitrim,Dublin, Monaghan, Mayo and Roscommon there are workshops, lively discussions and the Young Critics Panel itself. Here the Young Critics will get the opportunity to voice their considerable opinion on the work of the Dublin Theatre Festival.

Join us Oct 8th at the Project Arts Centre, Dublin at 1pm. This year’s panel will be chaired by Helen Meany.