Way back in June, NAYD Young Critic Méabh Hennelly took a visit to the Peacock Theatre to view Town is Dead by Philip McMahon.

In this podcast Méabh is joined by her friend Isabel Horner to cast their critical eye on Town is Dead.

Méabh is an NAYD Young Critic for 2016 and a member of Dublin Youth Theatre.

Wishful Beginnings: undoubtedly a show with the power to start the revolution that our world today needs most.

Upon entering the theatre of the Project Arts Centre on the 7th of October 2016, the audience suddenly, with or without realising, became immersed in the concept that Verk Produksjoner placed before us. The first thing that you can’t help but notice is the towering plywood wall reaching from the floor upwards, seemingly with no end. This wall was placed at the front of the stage, leaving the actors with a stage approximately no more than two metres in width. Seemingly random costume and prop items lined the outer aisles, where the actors waited to begin.

Between the towering wall of the set, and being entirely surrounded by five actors in various stages of curious costumes, to an extent, the audience couldn’t help but feel somewhat enclosed within the space. This made a very bold and effective addition to the performance as it really aided in exposing the concept of the piece.

Wishful Beginnings is not your traditional piece of theatre, but that’s precisely what I loved most about it. It was more of a conceptual, contemporary, abstract piece of theatre. It took an in-depth look at our world and our society at this present moment in time, and explored through means of improvisation and symbolic or metaphorical scenes, what our future will look like if we continue as we are.

Verk Produksjoner touch on topics such as; fashion and popular culture, mental health and self-harm, industrialisation, LGBTQ+ rights, and animal cruelty. These topics were approached in a rather artful way by using metaphors and symbolism, truly advocating the “show, don’t tell” technique. However, as this technique was so well put to use that, on the surface, it almost seemed as though none of these topics were covered. It was only when the symbolism (ranging from the use of costume, prop, script, and lighting tools) became fully understood, did these topics, or “social issues” and the concept of the piece, become the plot. 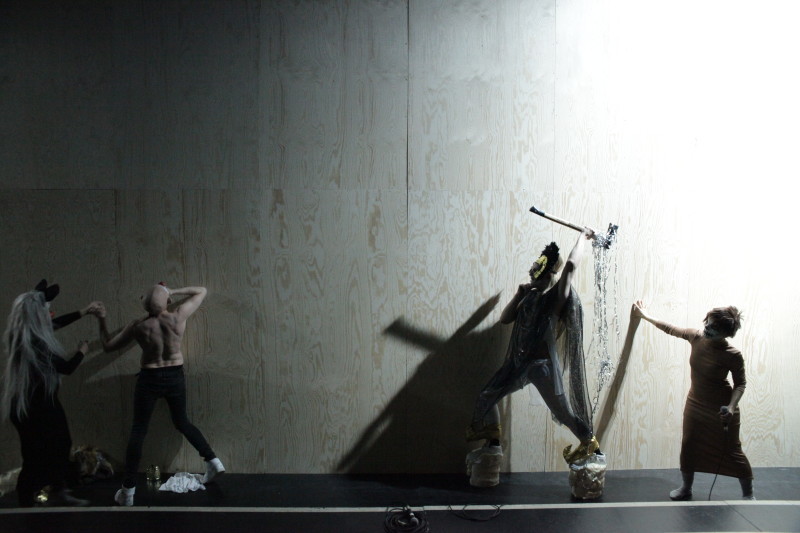 The acting from all of the actors was to a very high standard. It was very natural and credible. Espen Klouman Hoiner, in one scene in particular, gave an outstanding, powerful and moving performance portraying a painful death. The performances overall were very impressive, especially so when taking into account that parts of the show were improvised. Despite this, the show flowed seamlessly, the improvised scenes becoming almost indistinguishable from the rehearsed, adding to the authenticity of the entire production.

Overall, Wishful Beginnings was a thoroughly enjoyable experience. It was truly a powerful and moving artwork. However, as enjoyable and powerful as I found it to be, I understand that this show is not suited to everybody, as it may be difficult for some to fully grasp the concept, and therefore, the “plot” of the piece. Wishful Beginnings is most definitely a show that I’m glad not to have missed.