In the run up to NAYD’s Young Critics Panel on Oct 5th as part of the Dublin Theatre Festival, we will be publishing a series of reviews from the Young Critics.

Over the summer months we asked the Young Critics to attend some shows in their own home venue. We asked them to make a short vlog review of the experience. We then asked a selection of them to turn these into written reviews. Dr. Karen Fricker offered some editorial advice. 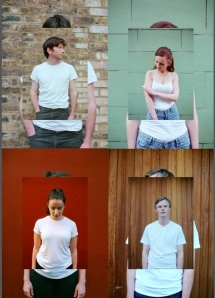 The plot of Ellen Flynn’s new play is certainly a familiar one: four twenty-something strangers meet at a speed-dating night and become entangled in a strange love quadrangle while struggling with fidelity, friendship and loyalty. Given all the familiar tropes and superficial philosophy associated with these kinds of plays, Flynn’s talent is in resisting those clichés. Rather than presenting us with archetypes and then subverting them, we’re shown complex characters who resist being reduced to archetypes in the first place. There are no good or bad people in these relationships, only ambiguous choices made by flawed people to ambiguous ends. The play attempts to show our collective social network for what it really is: normal people navigating a world that isn’t.

The difficult themes of vanity, objectification and secrecy are captured well by the design elements of the play. The set, which at times takes up the entire width of the already small stage, is comprised of four door-frame-sized two-way mirrors which move through the space on tracks. At the best of times they serve to frame the action of the play, surrounding the characters and forcing them to confront themselves or allowing them to judge each other from behind a reflective screen. Occasionally though, it seems there’s a tendency to manipulate these mirrors just so they don’t go to waste. This endless fluidity disorients and induces fatigue as often as it heightens the drama.

In some cases, the non-stop movement on stage fits nicely into the hectic and sometimes surreal nature of the play. As for the plot itself, things are a little more muddled. The lion’s share of the play is effectively a highlights reel of the four characters’ relationships as they go from strangers to lovers and back again.  As the show’s title suggests, the concept of time is a loose one and we often see these relationships grow and change without any real indication of how much time has passed, which leads to some confusion. The plot is further convoluted by hectic dreamlike interludes and even in the most intimate moments, we’re distracted by the actors manipulating the set around them to change the space.

It’s in returning to the more real, albeit complicated interactions between these four friends/foes/lovers that Atkinson’s talent really shines through. With the help of a great cast of characters and actors (Nichola McEvilly being the MVP as a desperate housewife seeking escape), speed, distance and emotions are all explored in their fullest range to give a dizzying sense of drama in the lives of these characters. Whatever about surreal interludes and unpredictable plot pacing, this is ultimately a play that feels as strange and immediate to us in the audience as it does to those on stage. And that is no small feat.