In the run up to NAYD’s Young Critics Panel on Sunday Oct 4th as part of the Dublin Theatre Festival, we are publishing a series of reviews from the Young Critics.

Over the summer months we asked the Young Critics to attend some shows in their own home venue. We asked them to make a short vlog review of the experience. We then asked a selection of them to turn these into written reviews. Dr. Karen Fricker offered some editorial advice.

With just a week to go until the Young Critics hit the Dublin Theatre Festival  we review My English Tongue, My Irish Heart by Martin Lynch 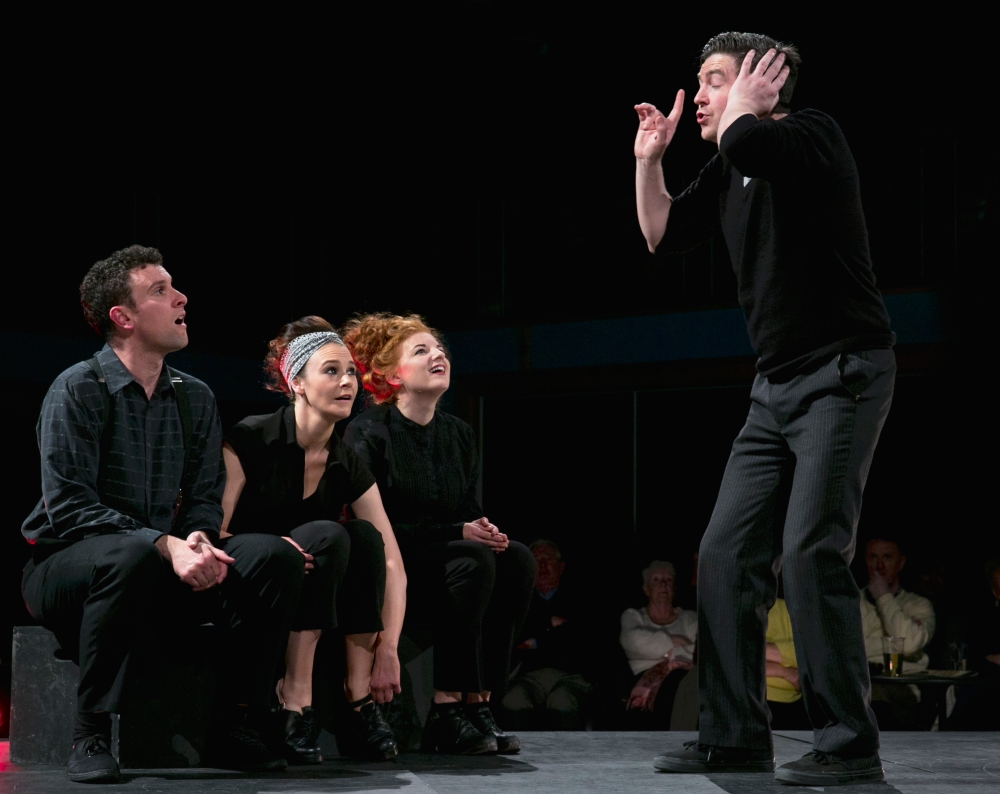 My English Tongue My Irish Heart, an in-depth look into Irish emigration to England across time, was both historic and intriguing to watch. The plot focuses on a 21st century couple, Susan (Kerri Quinn) and Gary (Cillian O’Dee), living in Dublin. He is from Mayo and is a bit of a culchie, while she is an adventurous young woman from Tyrone. She wants to emigrate to England, but Gary does not want to leave Ireland. The play also interweaves into the plot smaller stories of people emigrating from different periods in the past including labourers, bottle washers, and pickpockets. As the play moves from scene to scene, this sometimes becomes confusing, as it is hard to figure out what era the play is in or which story is being told. The script itself contains interesting facts about emigration but sometimes this becomes too much when a bundle of information comes at you all at once.

When the audience enters, we see Martin Lynch’s and Niall Rea’s set design of one large box in the middle of the stage with smaller ones piled on top. When the actors came out, they sing while moving the boxes; I found this to be a very clever metaphor for the work the emigrants were seeking in the new places they were moving to. The whole cast sang traditional Irish songs during the performance, and special praise has to go to Margaret McAuliffe, who is an amazing singer. The lighting is basic with spotlights on centre stage and to the corners, which would black out in certain scenes. The audience sits around the theatre, with some at tables. This works well in a pub scene, as it makes you feel like you are in the pub watching the action go on.

My English Tongue, My Irish Heart by Martin Lynch

The acting is very believable and enjoyable. The actress who stands out the most is Kerri Quinn; her presence on stage, comedic character, and natural presence really make the production. One downfall is that the actors did not always play to the audience in this theatre-in-the-round. When the action was on the other side of the stage, I felt distant from the play.

This production aims to teach the audience about Irish emigration to England. While it does achieve this somewhat, in my experience the play is more educating than entertaining, and at times I lost interest. I would particularly recommend it to people who have an interest in history, and I have to compliment the cast and crew on their hard work and research, which was clear to see.

The Dock, Carrick On Shannon  kindly supported this event.