Cork is one of Ireland’s nicest cities, throw a bunch of young teenage critics into it and it becomes a beautiful city! Meeting our fellow critics again at Heuston station was so exciting for most of us getting the train from Dublin. The catching up and laughing was great on the way down on the train. As we pulled into Kent station we were all definitely on a high. We met with Alan from NAYD and everyone else then at the bus station. We were all together again!

We went straight to our accommodation, Victoria Lodge, and got our rooms, we each had our own bathroom – get in!  The rooms were lovely, a fully stocked kitchen and some basic food supplied by Cork Midsummer Festival and NAYD. We all had a spot of lunch and went through a few house rules. Secret letters were given out to us all with unique tasks on them; we read them and then set off into the city of Cork.

As soon as we left the Lodge, our task began. My task was to ‘tweet’ about the smells of Cork city. We had to keep our instructions secret from each other. We walked for 50 minutes to the Camden Palace Hotel, an arts centre on the quays of the Lee, in the baking sun. When we arrived we found ourselves in a dance studio, a very appropriate setting for the production we were about to see. Alan and Karen set up music and we all had to dance and move to the beat and rhythm of the music.

We found out that we were about to see the show Rian in the Cork Opera House, so we read a bit about the history and background information on the show.

As soon as we were happy, we set off over the bridge to the Opera House. I think I speak for everyone when I say the show was spectacular! It was full of contemporary dancing and traditional Irish music, as well as a mix from other places including   Africa. The ‘cast’ so to speak, were a mix of different nationalities, and a running theme throughout the show was how humans can all bond together with music and dance. A really special surprise in the show was the audience participation at the end – we were all invited up on stage to join in dancing with the others. It was so fun! A really cool way to end the show.

We caught the late bus home and all crawled into our rooms. Most of us stayed up and chatted some more and others began to drift off into bed. Rise and shine at 8am the next day was hard for most of us. A good big breakfast was needed for the really long day ahead!

We started the day with a nice brisk 50 minute walk to the Cork School of Music, where Karen and Alan were waiting with another workshop on how we felt about last night’s performance. We had a quick look at Parallel Cities: Shopping Centre, the production we were about to see, before setting off to the ‘secret location’ for the bus they had arranged. We had a bit of free time before we were due at the location so we wandered off to see some sights of the city and to continue our tasks.

We gathered at the location which turned out to be the bus station and were brought to a shopping centre somewhere in Cork. We were given a set of ear phones and a pocket radio, which they tuned for us. As we entered the centre a voice started to play in the earphones giving us a set of instructions, such as “imitate and follow a stranger” and “Dance as if no one is watching.” It went on for a good 50 minutes. I felt like a secret agent, it was brilliant!  It was a really different approach to theatre performance.

We travelled back to the station and went to dinner in Luigi Malone’s, a very fancy restaurant! After dinner we went back to the Opera House and went to see a preview showing of Record by Dylan Tighe. It was sensational. The performance was full of raw emotion and honesty. Songs from a specially written album by Dylan himself were also included. I really enjoyed the show and most of the others did too.

After Record we went straight across the river to Patricks Hill to see Parallel Cities: House. We were given headphones yet again and radios too. Two houses that stood opposite each other were used in this. People were seen in the windows and as a voice started up in the headphones a room in the house lit up and we could see the words acted out in the window. People of different nationalities were there sharing their stories. There were people from Ireland, Pakistan, Hungary, Poland and Spain. The stories were really interesting and I enjoyed the experience.

We returned to our accommodation for our last night in Cork together! Up again at 8am on Sunday to pack our bags and clean our apartments. We then set off to the Cork School of Music for the last time. We did another workshop sharing our thoughts on what we saw and took part in the previous day. We were really on a high after such a good day. We wrote reviews on our favourite performance over the weekend in groups and sent them onto Alan.

We got together for a last group picture and then went our separate ways. Emotional goodbyes were said at the bus and train stations! The train back to Dublin was a quick and tired one – with most of us falling asleep at some point. I think I speak for everyone when I say that this weekend in Cork was a really great one, it will never be forgotten by any of us. It was a truly brilliant weekend. Thank you to the National Association For Youth Drama and Cork Midsummer Festival for everything and thank you to Alan King, Karen Fricker, Diane O’Connor and Mirjana Rendulic for all their help support, insight and for taking care of us so well! 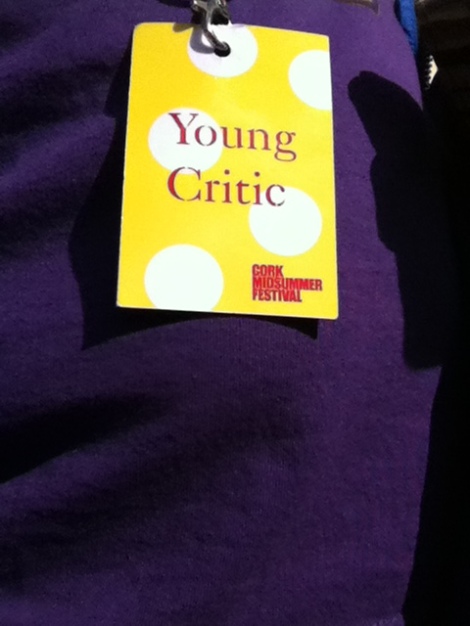