Classrooms are some of the most popular scenarios for plays – whether it be a story of a trip to the boarding school (Daisy Pulls It Off by Denise Deegan), or a teacher faced with the duty of educating youth (Alan Bennett’s  The History Boys is a great example), the classroom is the perfect closed-off space for many a show. But one thing that I have never seen worked upon on the big stage is a parent-teacher meeting – and CLASS does this to perfection, and more. You could almost say…. It’s a CLASS act.

Puns aside, this production was one of the most phenomenal experiences I have had from a small-cast production in a while. The setting never changes. The tension never changes. The actors never change…but their characters do. The story revolves around Brian and Donna (played by Stephen Jones and Sarah Morris) and the struggles they face bringing up their children in a broken relationship. The standing point in the story is that their 9-year old child, Jayden, is having troubles at school – and his teacher (Will O’Connell) is intending to enforce learning support upon him, which brings great grief onto Brian specifically.

Now this alone would make for an interesting story. The could have stopped here, added little else, and the play would still be a triumph and an excellent piece of writing. But co-writers David Horan and Iseult Golden, under Horan’s direction, deserve extra appraisal for going beyond this one idea and adventuring into unknown territory. At first I was worried when I heard about the actors “reverting into the younger generation”. However, when I first seen Brian transform into Jayden and Donna into the child of a drug addict, I knew this was something special. Their childlike states gave myself and the audience the information we needed about the situation at hand without a word spoken by the parents.

The teacher himself faces some sort of internal conflict – between his own personal matters, the slowly derailing meeting and the children’s situation at their learning support. It was interesting to note how he deals with both children and parents, despite them being the same actors – For example, their transition from a dance routine to a tense, nervous situation between the same trio.  This transition was flawless – especially with the parents and their kids, who could revert from being hilariously out of tune with the rest of the world to stern, stubborn, angry at the world and ever situation around them.

The ending alone was one of the key points of the play, and possibly the part that shook me the most. Of course I won’t spoil it, but it finally became clear the true nature of Donna and Brian’s relationship, and the root of the majority of the problems faced throughout the play. Ultimately, the experience was riveting and exciting,  with comedic moments scattered throughout the play – but the true focus and underlying messages of terror in a school environment and possible mental issues stuck strong with me, and for this I would thoroughly recommend seeing this play. 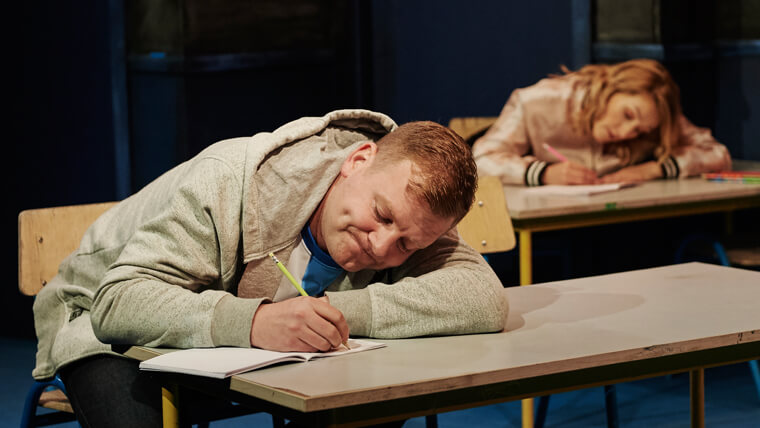 Class ran at the Peacock Theatre Dublin from 24th of January to February 3rd 2018. This production was reviewed at the Dublin Theatre Festival at The New Theatre in October 2017.